The traces can be seen everywhere. You just have to
be able to see and interpret them.
We are not in pristine wilderness, but in an area that
has been inhabited and impacted by humans for a long time.
“What we see here is a cultural landscape,”
says Ingela Bergman, associate professor of archaeology
and director of the Silver Museum in Arjeplog.
At Dumpokjauratj, located close to  Lake Hornavan,
people settled more than nine thousand years ago.

Archaeologist Ingela Bergman at the Silver Museum in Arjeplog, have been involved in excavations in the mountains around Arjeplog.Their research shows that the ice sheet receded much earlier than was previously believed. Foto Erland Segerstedt

For a long time it was believed that there was a thick sheet of glacial ice over this part of Sweden 9,000 years ago. But the research at the Silver Museum has shown something completely different. At that time the thick ice sheet had disappeared from the Arjeplog region and people had already settled here.
The climate, the landscape and the natural conditions were totally different. The first humans here found rich and productive vegetation, unparalleled at our latitude today. But they also encountered dramatic fires and violent earthquakes, which could have radically changed the  landscape in a short time. 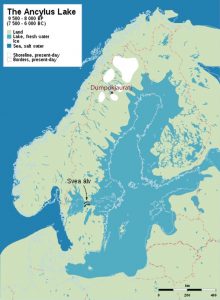 The interior of northern Sweden was the last part of Europe to become free of the ice sheet. Research done by the Silver Museum in the area at Dumpokjauratj in Lapland shows that people lived here as long ago as 7700 BC. These people probably came from the north, and here they found rich and productive vegetation. They lived by hunting, fishing and collecting edible plants. The settlement site at Dumpokjauratj was used for a limited time. When archaeological excavations started, the site had been abandoned for more than 9,000 years. The map, partly revised for publication here, comes from www.havet.nu, which is run by the marine research centres at the universities of Stockholm and Umeå. From an article by Thomas Andrén: Ancylussjön – fortfarande ett mysterium (The Ancylus Sea – still a mystery). Havsutsikt 3, 2003.

Sea buckthorn grew at Dumpokjauratj, with tendrils of hops twining round the stems. The ground was covered by plants such as willow, grasses and herbs. The climate conditions were favourable, and at another excavated site, just over ten kilometers from Dumpokjauratj, pollen from larch and apple from the same time was found as well.

Plants immigrated from many directions, and this happened quickly.
”At first there was a random combination of plant species in what we today would characterize as typical coastal plants, alpine plants and forest plants. Sea buckthorn is an example of a typical coastal plant which was established here early. The berries are rich in vitamin C, and they were probably an important resource for the people who came here,” says Greger Hörnberg, associate professor of ecology at the Institute for Sub-arctic Landscape Research.

The settlement site at Dumpokjauratj was carefully chosen. The people who came here were hunters and gatherers, and they knew how to make the best use of the natural resources.
Today, when viewed through our eyes, this place does not seem special in any way.
But 9,800 years ago the site, which was then a peninsula in the northern part of a large lake, presumably had everything you could wish for in a settlement site.
The ridge is made of sandy material, which was probably one reason why this was chosen as a dwelling site.
“It was a well-drained, dry place close to fishing and fresh water. It was also relatively easy to dig settlement pits and cooking pits in the sand,” says Greger Hörnberg.
As a result of land uplift, the settlement site is now surrounded by mires.

Who were the people who lived here? What was their life situation like? Where did they come from? And where did they go afterwards?
Of course, there are no definite answers to all these questions. But the finds from the archaeological excavations indicate that a group consisting of between ten and twenty-five people lived here, and with the aid of charcoal remains from the cooking pits it has been possible to date the settlement site to 7700 BC (alt. 9900 before present). This means that Dumpokjauratj is the oldest securely dated settlement site in northern Norrland.
A great  number of finds at the site show that Dumpokjauratj was a settlement site where people stayed for long periods, and that reindeer made up an important part of their diet. The excavations also turned up fragments of fish and birds.

But we do not know why the site was suddenly abandoned.
“What we were able to see in the analyses was a thin layer of sand buried in the mire surrounding the ridge. This indicates that something dramatic has happened, perhaps  an ice-dammed lake further west that suddenly collapsed and a wave of water subsequently swept over the valley, bringing sand with it,”s Greger Hörnberg says.
“But when that happened,  about eight thousand years ago, the people had already left the Dumpokjauratj site.”
Yes, Dumpokjauratj was abandoned for some reason we do not know of.

Perhaps people lived here for just a hundred years or so. And since then the site has been deserted.
As a result of land uplift, it is now some distance down to the lake shoreline, and instead of water the site is  surrounded by mires.
“But you get a rather special feeling by coming here, sitting down and reflecting that people lived here almost ten thousand years ago,” says Greger Hörnberg.

Every year the Silver Museum and the Institute for Subarctic Landscape Research arrange a “tour of knowledge” to selected places. Researchers come along to tell participants about how the surroundings and the landscape have been used by people and about the resulting changes. One of the sites to be visited this year is Dumpokjauratj.